Black legged ticks and Deer ticks, the 2 most common ticks that spread or transmit Lyme disease have significantly spread across the United States over the past 25 years, according to new research.

The report from the Centers for Disease Control (CDC) and Prevention, published in the Journal of Medical Entomology, found that the parasites that carry the disease, again from black legged ticks or deer ticks, are now found in nearly half of all U.S. counties. This was major news today as it’s the first study since 1998 to examine where these ticks live and how much influence they have over where in the US that Lyme disease is contracted.

We’ve found that most people are shocked to hear about how many cases of Lyme disease go undiagnosed or are misdiagnosed each year. Unfortunately, approximately 30,000 cases of Lyme disease are reported to the CDC, though the number is estimated to be much higher, as only a fraction of cases are actually reported. In fact, according to an analysis published last summer, health officials report the number of actual cases is closer to 334,000. This is 2016 folks and the results we’re hearing about from scientists now are showing that we’re seeing a steady increase in diagnosis each year.

If you don’t know, Lyme disease is typically transmitted to humans (and other animals, like deer) through tick bites. Common symptoms include fever, headache, fatigue, joint pain, insomnia, and a rash that often looks like a bright red “bulls-eye” at the site of the tick bite. Most cases of people who suffer from Lyme disease have been known to be treated with antibiotics. However, in some patients, if left untreated, Lyme disease can lead to chronic joint inflammation and neurological problems weeks, months, or even years after infection. For this reason, finding a diagnosis and doctor to help treat you quickly is imperative.

For the study at hand, Dr. Rebecca Eisen, a research biologist at the CDC, and her team looked at data from other published reports of state and county tick surveillance data going back to the year 1996. They analyzed numbers from all 3,110 counties in the U.S. to determine where the ticks have been established and known to reside, meaning there were sightings of at least six individual ticks or at least two of the three host-seeking life stages had been identified in a single year. The researchers also noted which counties had one or more reports of black legged ticks and which ones had none.

The results showed that the black legged tick has been reported in more than 45 percent of U.S. counties, compared to 30 percent of counties in 1998. Additionally, these ticks are now considered established in twice the number of counties as in 1998.

The most dramatic geographic expansion was seen in the northeast and New England U.S. states, including large areas of New York, Vermont, Wisconsin, Ohio, and Minnesota. These tend to be the areas of the U.S. with higher population. Higher populated areas tend to help spread the density of ticks and their environment. Additionally, new forestation and higher deer populations have been forming in these areas. 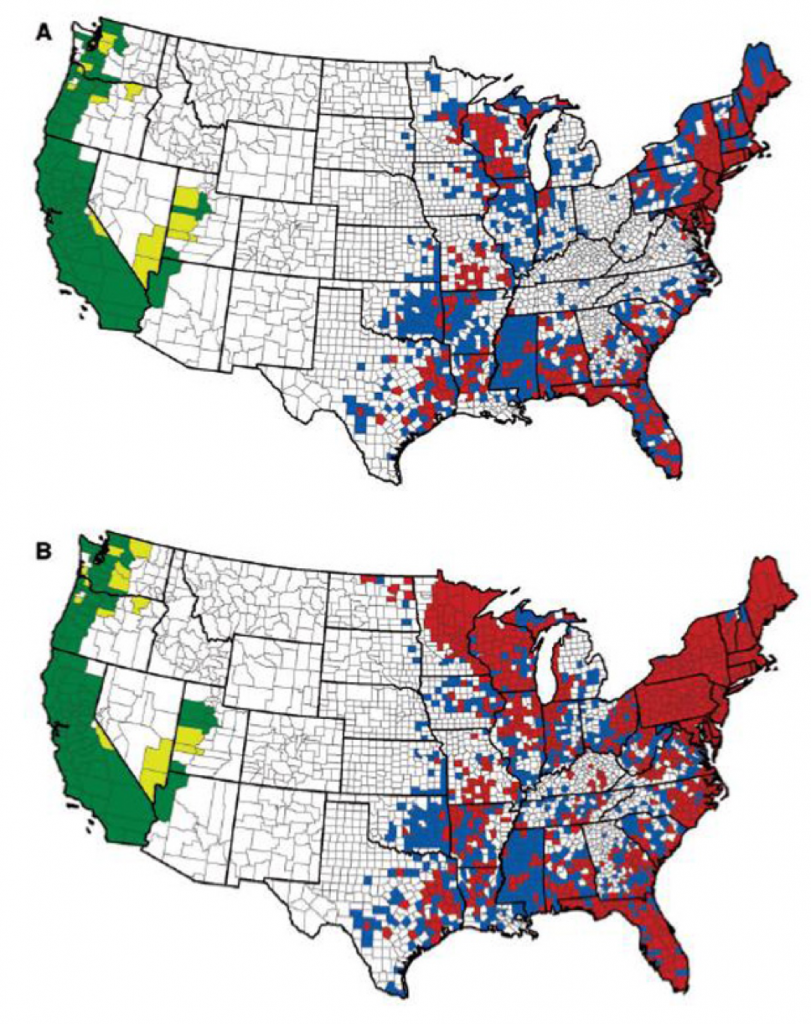 “The nice thing about this data is that it shows the vector — the ticks that transmit Lyme disease — spreading in the same ways that we’ve been seeing the human cases spreading,” he told CBS News. “So, the take home message is that Lyme disease is a geographically expanding infectious disease and so the areas of risk have expanded dramatically over the last two decades.”

Aucott explained that reforestation and an increased deer population have contributed to the tick expansion.

“It’s really a reconstitution of where the ticks were originally. In the early 1900’s, North America was deforested for agriculture and deer were hunted almost to extinction, and so the ticks lost their normal habitat,” he said. “Now as we allow the United States to reforest and have a booming deer population, the ticks are reclaiming their habitat.”

Climate change may also play a role, he said, as ticks thrive in warm, damp environments. The last few years have averaged some higher temperature than decades past.

Experts say we will continue to see the number of ticks expand, for the foreseeable future, along with a rise in cases of Lyme disease; in areas not previously affected. This means that the general population really needs to be educated and become aware.

Aucott said it’s important for people to keep in mind that they can get bitten by a tick anywhere there’s green space.

“To get Lyme disease, you don’t have to live out in the country,” he said. “There are many green belts and streams that come down into cities and those habitats support deer and ticks really well. The ticks are really everywhere unless you live in an incredible urban center where it’s all asphalt and concrete.”

CDC Best Practices To Reduce Chances of a Tick Bite

As such, people should take precautions to avoid ticks. The CDC recommends the following best practices to keep the chances of getting a tick bite at a minimum:

Above all, if you happen to find a tick, take precautionary measures. Use this guide to safely remove the tick. Don’t throw it away though. Save it and you can send it off to be tested for Lyme disease.

If you have contracted Lyme disease, please consult a doctor. If VitaLyme can possibly help, we highly recommend you try our 3 step Lyme disease natural supplement to stop the disease in it’s tracks.