Have you ever woken up one morning and just not felt quite right? I mean, really knowing that something is just not right and it isn’t the standard left over sleepiness or hunger pangs you might more normally feel. It might be a situation where you have a scratchy throat, your head feels slightly achy, you’re nauseated, or just dizzy? You act like nothing is wrong and think it’s because you just woke up and you need to get up and about, then you’ll start to feel better. But, as the day goes on, you don’t. You find that you’re not feeling better like, or even normal, like you should. You start to feel worse. Fever, chills, sweats, fatigue, nausea, aches all over your body. Yep, it starts to feel like the flu. We all know this routine.

But, What If It Wasn’t The Flu?

What if there’s something else wrong? What if it’s something worse, perhaps even contagious? You’re not worried about it though, you’ve already self diagnosed what you have and just go to the drugstore and pick up some over the counter medicine before planning on spending the next three days in bed. But after three days you still show no signs of getting better. Now what? This scenario is all too common and is exactly how many diseases are diagnosed; 3 to 4 days after the first sign of symptoms occur.

Why is waiting so bad? You still don’t feel well so then you decide to get looked at by a physician, that is a good thing right? Well, yes but in many cases waiting can mean the difference between life or death, full recovery or a lifetime of pain. There are diseases out there, both bacterial and viral that are non-forgiving to the fact that you just wanted to go to bed and sleep off the illness.

An example of a viral infection that has the same initial symptoms of the flu is Hepatitis A.

There are three types of Hepatitis.  Type “A”, which is the most common form, gets its reputation for being the Hepatitis that is sexually transmitted. It is a highly contagious liver disease, so having sex with an infected person chances are you will get it. In all actuality, Hepatitis A is transmitted from person to person via fecal matter. It can also be spread through contaminated water.

Hepatitis A flu-like symptoms show up any where from two to six weeks after exposure to the virus and can sometimes last for up to 2 months. There are very few cases of Hepatitis A infections, fewer than 20,000 cases per year. There is a vaccine for Hepatitis A, usually given in 2 doses. This is why the cases in the United States are so low. There is no treatment for Hepatitis A, it usually clears up on it’s own and the liver should heal within six months with no lasting damage.

Another virus that can start off with flu-like symptoms is human immunodeficiency virus (HIV).

HIV is a viral infection that can be transmitted through sexual contact, through blood or from mother to child during pregnancy, childbirth or breast-feeding. The majority of people infected by HIV develop the flu-like symptoms within a month or two after they get infected by the virus. Although the symptoms of primary HIV infection may be mild enough to go unnoticed, the amount of virus in the bloodstream  is very high at this time. As a result, HIV infection spreads more efficiently during primary infection than during the next stage of infection. HIV infection weakens your immune system, making you highly susceptible to numerous infections and certain types of cancers.

If you receive no treatment for your HIV infection, the disease typically progresses to full AIDS status in about 10 years. By the time AIDS develops, your immune system has been severely damaged, making you susceptible to opportunistic infections — diseases that wouldn’t usually trouble a person with a healthy immune system.

Below is a more robust list of other known viruses where the symptoms are flu-like, but certainly much more complicated and equally or more alarming than the flu:

Viral infections are not the only type of infections where flu-like symptoms are common. Bacterial infections are just as susceptible to those uncomfortable symptoms, which for some of these infections makes a dangerous situation since early detection is key. The flu symptoms too many times will prevent someone from rushing in to the doctor or hospital to get checked out, wrongly assuming they will get better within a few days time.

Bacterial Meningitis, is an example of a serious bacterial infection where early detection is crucial. Meningitis is the inflammation of the membranes surrounding the brain and spinal cord. This disease rapidly travels through the blood and into the brain. Flu symptoms are typically the first symptoms to appear but this disease, making it sometimes misdiagnosed or ignored by the patient, and can become a serious situation resulting in brain damage, paralysis or even death.

Lyme disease is caused by a bacteria called Borrelia burgdorferi that is passed on to humans by black legged deer ticks. One of the symptoms of Lyme Disease is inflammation in various areas, including your major joints. Inflammation is one of the initial symptoms [which feel similar] to flu symptoms and can affect the joints, nervous system, as well as other organs. Only a minority of black legged tick bites leads to Lyme disease. The longer the tick remains attached to your skin, the greater your risk of getting the disease. Lyme infection is unlikely if the tick is attached for less than 36 to 48 hours.

A small, red bump often appears at the site of a tick bite and after a few days will disappear. This is normal and does not always indicate Lyme disease. However, below are a few common signs and symptoms may occur within a few days or weeks after being infected. The below are a quick list but not always all inclusive:

From 3 to 30 days after an infected tick bite, an expanding red area might appear that sometimes clears in the center, referred to as a rash, forming a bull’s-eye pattern. The rash expands slowly over days and can spread up to about 12 inches from one end to another. It usually isn’t itchy or painful, just annoying. The rash is one of the hallmark physical marks of Lyme disease. Some people even develop this rash at more than one place on their bodies. Flu-like symptoms. Fever, chills, fatigue, body aches and a headache may accompany the rash.

If untreated, new signs and symptoms of Lyme infection might appear in the following weeks to months. These include:

Bouts of severe joint pain and swelling are especially likely to affect your knees, but the pain can shift from one joint to another. This has been described as a small nagging pain that often starts in your knees and elbows, but then tends to be felt in your hips, back, and neck. It ranges from a lull to a throbbing feeling and even ends up in swelling. Ice and heat are then uncomfortable to apply and other than just taking some acetaminophen or ibuprofen, the pain just doesn’t subside.

Weeks, months or even years after infection, you might develop inflammation of the membranes surrounding your brain (meningitis), temporary paralysis of one side of your face (Bell’s palsy), numbness or weakness in your limbs, and impaired muscle movement.

What Other Bacterial Infections Can Act Like The Flu? 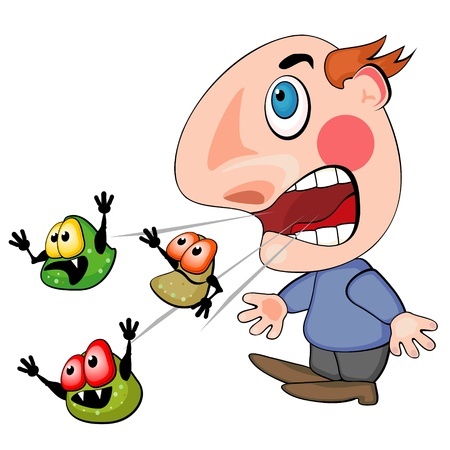 Cleansing the body and revitalizing the immune system will help fight the discomfort and pain associated with these infections. That’s exactly what VitaLyme’s supplements do for Lyme disease and those who suffer from the symptoms. Our natural Lyme disease treatments focus on you and keeping your body strong and making your body a clean temple that won’t harbor the viruses and bacteria very well, allowing your body to rid itself of them. We want to remove the welcoming environment your body provides to the Lyme disease bacteria by helping you get and maintain proper health. The fact is that mainstream treatments are harsh as well as harmful and leave behind their own on-going problems. Whether you use only our natural supplements to help you get rid of your Lyme disease symptoms or use them in addition to your current plan, we can help you overcome your symptoms simply and quickly. If you haven’t yet, we invite you to get started on your natural treatment right away!